Hostile Takeover was a long process full of pit falls. From conception to finish, it took a lot of time, energy, and more money than I had to put it together. The whole project took a massive toll on me and I felt it's finally time to write about what happened. The good, the bad, what I learned, and what I still need to improve.

In November 2020, I was playing around in Tabletop Simulator, spawning things in and messing with the base inclusions. That's when I stumbled upon piece pack. This was the first I had heard of it and all the little things it had where so cool! I spent several hours messing with various concepts that went from a farming game to a witch's ritual. In the end, things started coming together for a simple strategy game. 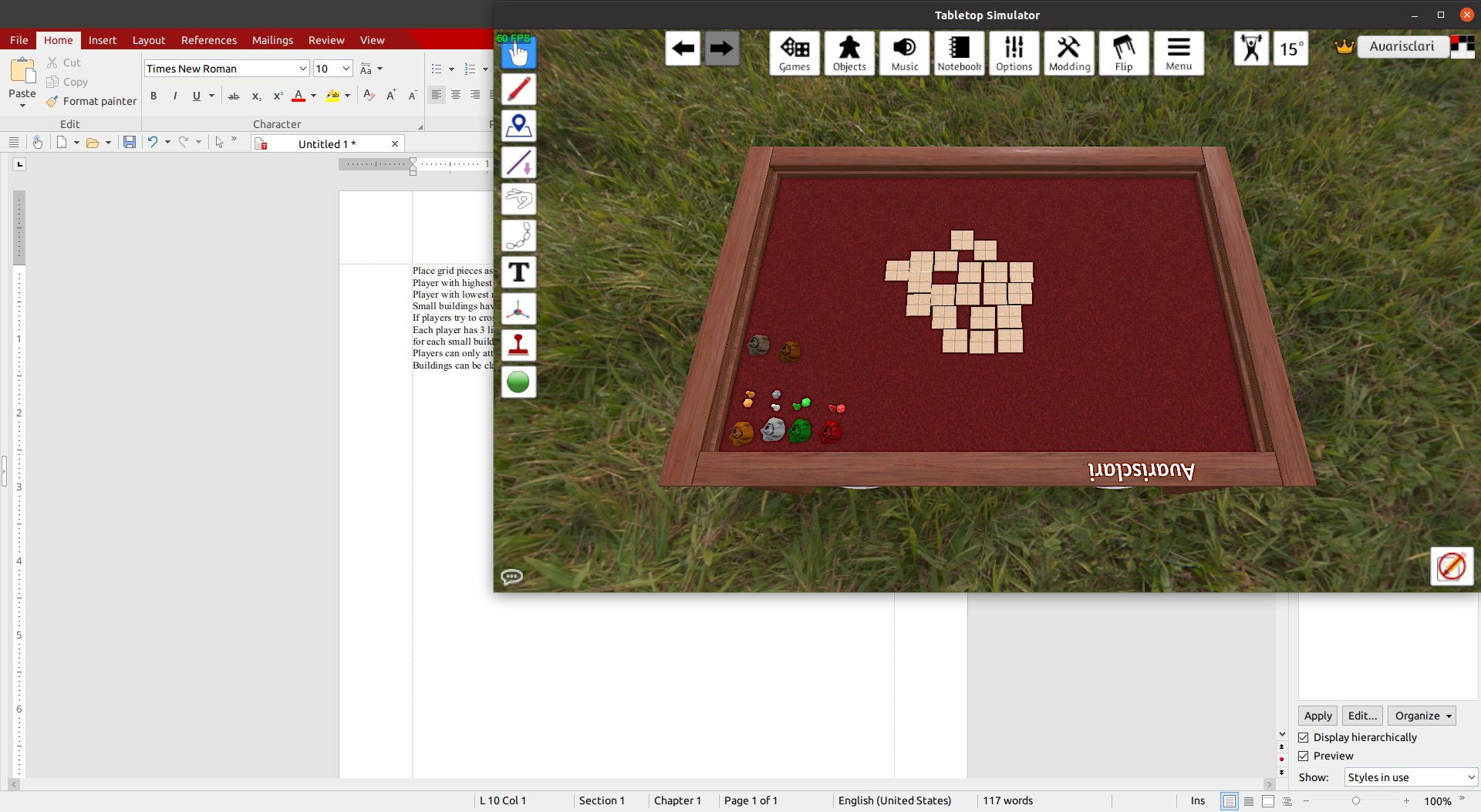 It wasn't much to look at yet, but I saw a lot of potential here. I called my roommate over and we both spent the next 4 hours playing around with this concept. We knew it was fun, but we also weren't having fun with just *us*. Most of the core parts of Hostile Takeover actually fell into place on day one. Map generation, the use of 12 sided die, the two different building types. All of them were part of of the game from the start.  It was decided early on that you could recapture buildings at any point in the game, meaning it could potentially go on forever. The goal was to take out the other players and conquer the map. The question quickly became "what is the ideal game?"

We have a good stack of games in our apartment and we've always found it frustrating how many of the strategy games say "2-4 players", but what they mean is "2 or 4 players". We have three people who generally play the games together living here. That makes several games inaccessible if all of us want to play a game. That was where I decided to optimize for a three player game, but I also know others want to play. It became a 3 or 4 player game as a result of us not having any, simple as that. After that, we settled on three lives per player, allowing for a true end game to be reached.

I knew from experience that this would be a hard game to sell. My previous attempt at a tabletop game had been a complete failure for me, but on the upside it was only time and effort, I hadn't had to spend money on it to make it. I vowed Hostile Takeover would be different. A month after I started designing it, I had a physical prototype available. I wanted to make this game as real as possible to increase interest in it. The core game play was finished very early on, but it took three months to come up with a title. The first three months, I had been calling it Urban Conquest but the title felt too charged for the game.

Add Board Game To Collection

Thanks for the post-mortem.
If you learned a lot, it wasn't a failure.
How far in advance did you start tweeting and utilize social media?

From day 1 of working on it. I always post my random ideas I'm working on because if I forget, having them documented helps and it works as a mini dev-log as well.

That is a great idea that many forget to do.
Best of luck with your future endeavors!